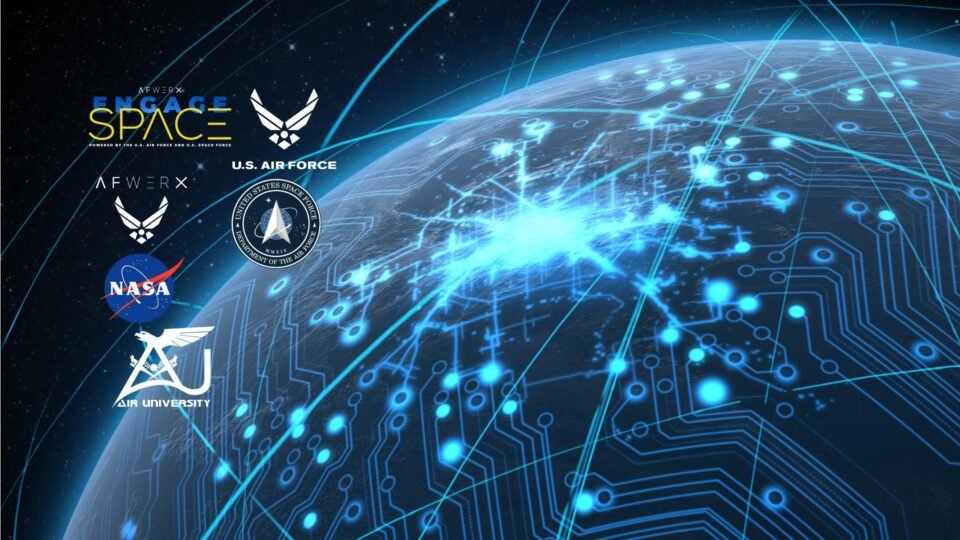 Over the course of the two-day event attendees participated from vast regions of the U.S., Canada, the U.K, Australia, Finland, Belgium and Brazil to join the highly engaging one-of-kind virtual event to revolutionize how the space ecosystem works, dismantle the walls between sectors and close the “believability gap” for what’s possible in space.

“We’re here because the Air Force realizes that there is plenty of room for improvement,” stated Craig ‘Yogi’ Leavitt, AFWERX Innovation Advisor. “The mission of the Department of Defense is to pursue strategies that promote a stronger, safer, and more prosperous nation. What better way than to partner with our entrepreneurs and innovators. EngageSpace is just the beginning.”

Over 50 space subject matter experts from the U.S. government reviewed and evaluated the submissions and the top 26 participating teams were selected and announced at the conclusion of the EngageSpace event. Participating teams represented entrepreneurial start-up’s, small businesses, large enterprises, academia and research labs originating from various states across the U.S. and Canada including California, Virginia, New Jersey, Maryland, New York, Massachusetts, Ohio, Nebraska, Washington, and Alaska.

Featured topics ranged from space innovation, the future of space and  the role of the U.S. Space Force with engaging panel discussions and debates with prominent experts from NASA and other organizations on the current status of space innovation, and tools to navigate the complex process for innovators to become fully contracted government partners, followed by a virtual happy hour and curated networking opportunities.

Rick Tumlinson, Founding Partner of SpaceFund and Space Frontier Foundation shared during the Mission Control panel discussion that we have the chance for the first time in the history of our species to expand beyond this one precious bubble and take life to places that are now dead. Dr. Joel Mozer, Chief Scientist at the U.S. Space Forceadded “I’ve been going around for the last couple of years saying that we are on the verge of the next great space age. I would like to modify that statement and assert that we are now in the next free space age. Space has become critical to our way of life, everything from BMT, GPS, Uber, to precision agriculture, all the things that enable communications.”

During the Space Walk Debate Versus Reality panel discussion, John Reed, Chief Technologist of United Launch Alliance stated “We are seeing a fundamental shift in the way the government is approaching space. I’ve seen it over the years within NASA with interagency coordination and cooperation on different projects.”

Dr. Douglas Terrier, Chief Technologist of NASA, added “I would say NASA has two goals in the way we are approaching exploration of cislunar space. One, of course, is to do the science, technology and exploration and push both human and robotics further out in the solar system. The second is equally important, the goal to create conditions to do that architecture in a way that creates the conditions to foster commercial success.”

Dr. Brent Ziarnick, Professor of National Security Studies at Air University shared during the Return to Earth panel discussion “We have to work as an entrepreneur community to advance American space power on all fronts. Space superiority is not just military superiority, its colonization, it is its own benefit, it’s mining, it’s all that.”

Col. Nathan Diller, AFWERX Director, wrapped up Day 1 with the Strategic Visions panel discussion stating “So much of the research, development and fantastic ideas are happening in the commercial space, and we’re thrilled about that opportunity to think in new ways.”

Featured discussions and breakout sessions with more industry experts, participant-generated ideation sessions and featured panel discussions with successful space entrepreneurs focused on best practices when working with the government, space funding and contracting pathways from across the government and venture capital communities.

During the Enter Into Orbit panel discussion Brig. Gen. Steven “Bucky” Butow, Director of Defense Innovation Unit reflected on how the late Steve Jobs referred to entrepreneurs as the crazy ones. The misfits, the rebels, the troublemakers, the round pegs in square holes. The ones who see things differently. They’re not found audibles and they have no respect for the status quo. “We need them now than ever before, especially in space.”

Jim Kervala, CEO of OffWorld added “There is a fundamental question about commercial engagement with government, we are not going to withhold our capabilities from the men and women that risk their lives to give us the freedoms we enjoy, investors realize that value proposition.”

In closing Col. Nathan Diller of AFWERX and the U.S. Air Force and Rick Tumlinson, Founding Partner of SpaceFund and Space Frontier Foundationreflected on the EngageSpace experience and the ways they witnessed a transformation with new conversations between the back-bone of this country – the entrepreneurs and the defenders of this country.

The AFWERX EngageSpace Challenge is made up of four challenges targeted at creating integrated space operations leveraging the best in technology while maintaining security, being resilient and increasing agility:

All of the teams selected for the Showcase are able to use the Commercial Solutions Opening created by AFWERX to gain a contract with USAF and USSF if there is a need that the solution could meet.  Any US owned small businesses can also obtain Letters of Interest from the USAF and USSF which can be used in a SBIR application, 20.3 is open until October 22 and also 21.1 which is launching later this year. For more information go to: https://www.afwerx.af.mil/sbir.html