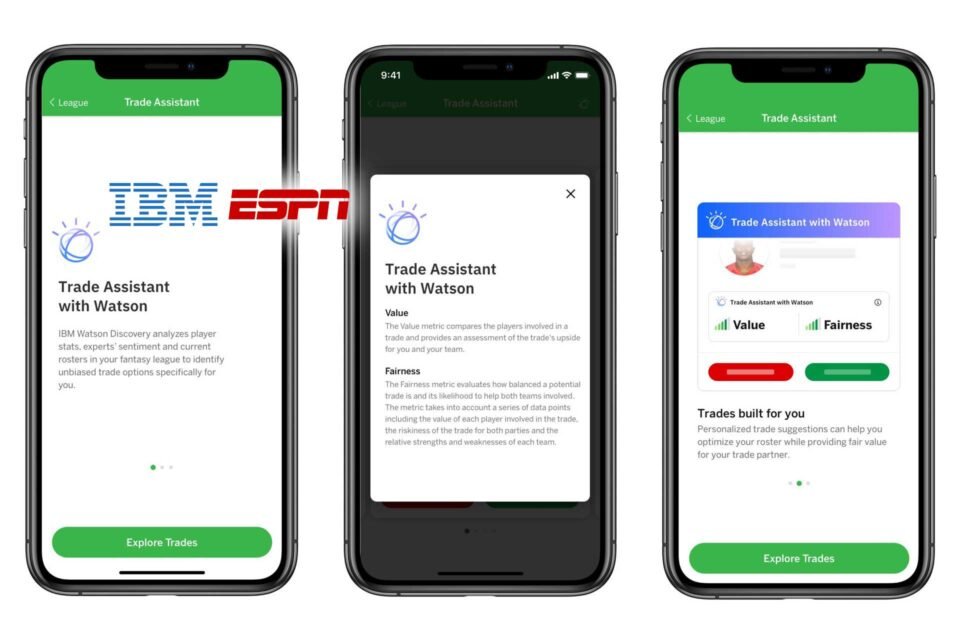 Trade Assistant with IBM Watson is designed to reduce the complexities of fantasy football trades by suggesting trades that assess the fairness and value of a proposed trade – helping fantasy football players make smarter, more informed decisions. Trade Assistant with IBM Watson will assess the value of a player on a roster, the cost of losing a player and the equity involved in a trade. The new IBM feature is integrated only into ESPN Fantasy Football apps (mobile iOS & Android).

“IBM is a longstanding, pivotal sponsor of ESPN Fantasy Football. Over the years, we have worked with IBM to uniquely integrate the brand and Watson technology to enhance the fantasy player experience and drive deeper engagement with sports fans,” said Marco Forte, Senior Vice President, Disney Advertising Sales. “This year, our relationship is reaching new heights with Trade Assistant with IBM Watson, which is a testament to the types of innovation that can emerge from exceptional collaboration.”

To suggest trades, Trade Assistant with IBM Watson uses Watson Discovery’s advanced Natural Language Processing (NLP) capabilities to extract, translate and review inputs on football players and teams such as player stats and experts’ sentiment from sources including ESPN.com, news articles, blogs and podcast transcripts. This helps to remove bias and uncover new insights from troves of unstructured and structured data buried in a variety of different document types.

Language is a persistent challenge for businesses because it is always evolving and lives in many different forms. NLP parses language into its elemental pieces to help organizations unearth insights, make more informed decisions and create conversational experiences. Today’s news builds on a series of recent announcements that demonstrate how IBM is advancing Watson’s ability to understand the language of business – from commercializing cutting-edge capabilities from Project Debater to transforming the fan experience at the US Open.

“Like the business world, Fantasy Football has access to massive amounts of data that can be extremely challenging to digest and glean meaningful insight from to make more informed and less biased decisions. IBM is advancing Watson’s ability to understand the language of business to help our clients turn information into actionable insights,” said Noah Syken, Vice President of Sports & Entertainment Partnerships, IBM. “Trade Assistant with IBM Watson is a chance for the millions of ESPN’s Fantasy Football users to directly interact with IBM Watson on a daily basis.”

Currently in its fourth season, ESPN Fantasy Football Insights with IBM Watson uses machine learning techniques to turn unstructured data into actionable insights by assigning a “boom” or “bust” designation based on the player’s likelihood of exceeding or falling short of his projected scoring range. Users can then compare player data to help balance risk and reward across their roster. Where the average fantasy football user takes in fewer than four sources of data before making decisions, the Player Insights with IBM Watson feature analyzed nearly 228 million articles and delivered 25 billion insights to ESPN Fantasy Football users across the world during the 2019 season.