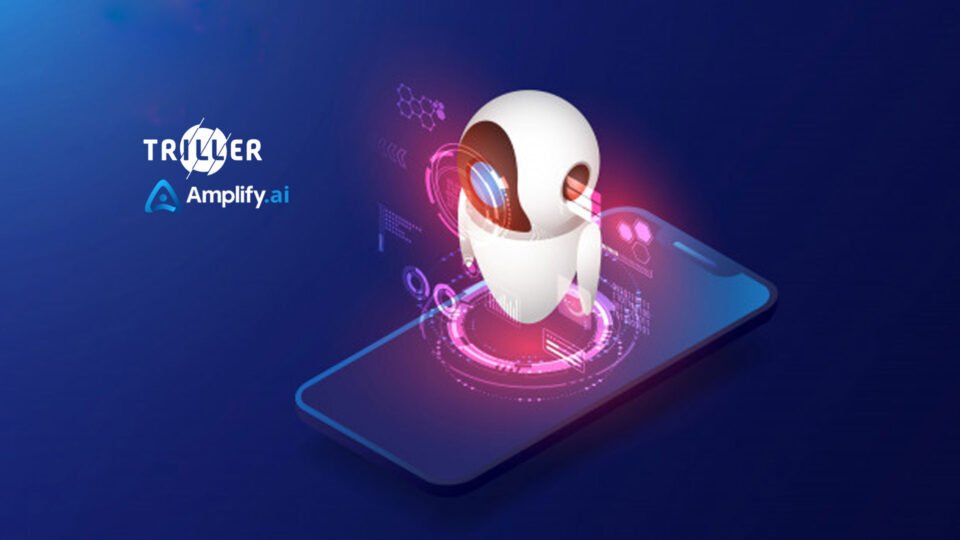 The acquisition brings one of Silicon Valley’s most innovative and cutting-edge technology companies into fast-growing TrillerNet, a first-of-its-kind company consolidating technology, apps and entertainment and lifestyle content platforms to lead the move to “Internet 3.0.” TrillerNet will use Amplify.ai’s AI-powered customer engagement technology to launch new business verticals at the intersection of technology, entertainment and brands. Amplify.ai is currently integrated with the Triller platform, which provides Triller users, influencers and brand partners an array of powerful AI-based tools and analytics to enhance, track and monetize their content.

Through the acquisition, TrillerNet is now able to offer brands and advertisers a unique, fully comprehensive branded content experience, starting with influencer-created short-form content from the app which is pushed through the wider internet while using Amplify’s AI tools to properly match the content to consumer, and ultimately program and distribute long-form branded content.

As part of the new integration, brands be given more comprehensive dashboards with both traditional and never-before-used AI analytics. Creators and influencers will also have access to these enhanced analytic tools to better understand where and how to maximize the value of their content.

“With this step we have officially replaced the inefficient brand funnel and turned it into a perfect cylinder,” said Mike Lu, President of TrillerNet. “There is nowhere else a brand can actually connect its message, its talent, its content and its distribution all in one place and simultaneously be given the ad-tech and mar-tech tools and analytics to perfectly hone its B-to-C experience.”

“This combination of two future-facing powerhouses clearly establishes Triller as the new paradigm for AI-powered lifestyle and entertainment content,” said Sarnevesht. “And we could not ask for a better CEO than Mahi de Silva. He is one of the brightest minds in business, and his vision and leadership will be invaluable assets to Triller during its explosive growth. Having built and successfully exiting multiple unicorns in tech, social media, ad-tech and eCommerce, there couldn’t be a better person for the role.”

Sarnavesht continued, “We are further excited to welcome the Amplify.ai team and their amazing capabilities as we position Triller to create the new ‘culture graph’ around content and the next generation of creators, influencers and fans across entertainment, sports and culture who are leading us toward Internet 3.0, as well as the brands and partners who want to connect with them in a meaningful way.”

“The Triller team has built something extraordinary, and I’m excited to take on the role of CEO and join an amazingly talented team that’s re-defining the future of content, creators and commerce,” said Mahi de Silva, new CEO of TrillerNet. “Triller has empowered global influencers with unique capabilities to reach and engage millions of users around the world, while delivering innovating ways for partner brands to join this vibrant and flourishing ecosystem. The best is yet to come.”

Amplify.ai’s AI technology is already incorporated, at point of creation, into content made by millions of Triller creators which is then distributed within the Triller app and also across the broader Triller network of owned and affiliated websites, optimizing its reach to hundreds of millions of users worldwide and driving a flywheel effect for original short-form and long-form content created on the Triller network. For brands, the technology enables visibility and control on when, where and how content is placed to maximize engagement and monetization.

Amplify.ai will operate as a wholly owned subsidiary and will continue to service and grow its roster of clients around the world. The Amplify.ai platform is used by hundreds of global brands in CPG, financial services, automotive, telecom, digital media and political and civic engagement, providing capabilities across Conversational AI, AI-powered comment moderation, customer profile building, customer journey orchestration, conversational ads, e-commerce integrations and customer service integrations. Amplify.ai technology has powered more than 11 billion digital engagements with over 600 million consumers around the world.

The Amplify.ai team boasts notable figures credited with significant breakthroughs in internet, commerce and communications technology, such as former RSA and Verisign executive Ram Moskowitz who helped design and develop the digital certificates for SSL and code signing, which continue to be the foundation for security of the Internet, and Amplify.ai co-founder and CTO Manoj Malhotra, a key pioneer of B2C SMS messaging.

The acquisition expands the scope of TrillerNet, which, in addition to owning and operating the Triller app, recently acquired leading live-music streaming platform Verzuz and owns Triller Flight Club, a live-event platform in partnership with Snoop Dogg that reimagines boxing as four-quadrant entertainment. The company also operates TrillerTV, a long-form content streaming platform with more than 65 original shows.

A leading entrepreneur and tech executive, de Silva co-founded and has led Amplify.ai as CEO since 2017. Previously, Mahi was CEO of Opera Mediaworks, the marketing and advertising arm of Opera Software ASA. Before Opera, Mahi was co-founder and CEO of mobile advertising platform AdMarvel, Inc., acquired by Opera in 2010. Prior to AdMarvel, de Silva co-founded social platform Frengo and a held leadership positions at VeriSign and Apple. He has been non-executive chairman of Triller since 2016.

IBM to Acquire myInvenio to help Organizations Use RPA