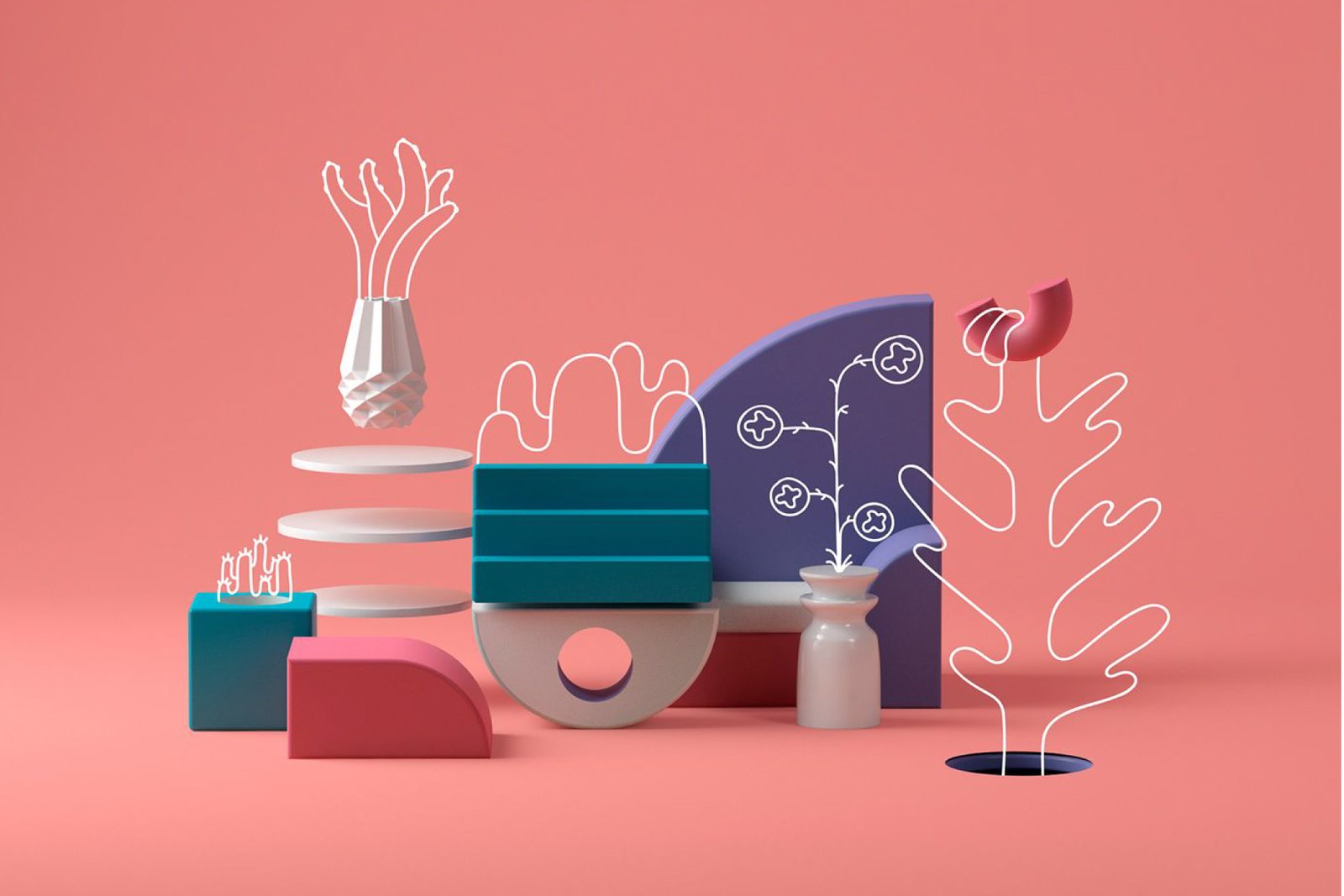 The adage about clouds and silver linings has certainly proven true for more than 200 students at the Tyler School of Art and Architecture at Temple University, who recently discovered how simple, effective, and sustainable going all digital could be while completing their assignments from home.

Suddenly cut off from the many tools and resources they would normally be able to access on campus because of COVID-19 — including many physical products they would typically use for their designs and photoshoots — the students quickly adjusted and found some innovative ways to get their work done.

Abby Guido, assistant professor of graphic and interactive design at the Philadelphia-based school, said many of her students were initially apprehensive about the notion of going all digital because certain aspects of their work had always involved physical elements. For example, graphic design students often take photographs or hire photographers to take photos of their completed packaging work, brochures, and other design projects. But when quarantining suddenly negated all of that, Abby said some students understandably started to “freak out.”

“It’s pretty much impossible these days to teach a design class without digital tools, yet you don’t typically ask students to do everything in an online environment,” Abby said. “Fortunately, we had this intuitive tool, Adobe Dimension, that could help them ideate and create both digitally and remotely. As they started using Dimension and bringing in 3D models and other assets from Adobe Stock, I think they were surprised by how well it fed their creative ideas.”

Ramping up for remote design

Olivia Colacicco, a junior majoring in graphic and interactive design, was one such student. She, along with her teammates, had an assignment to create visual imagery for posters, standing banners, and name tags, as well as social and mobile advertisements supporting a (now-delayed) wearable art show. Olivia and her teammates had to completely alter how they completed the project.

A team of Olivia, Tara Ryan, Josephine Kostusiak, and Wenqing Liu employed a mix of digital and physical assets to produce the blend of images going into their designs. They might take pictures of subjects, for example, or scan pieces of cloth to apply just the right textures. They would likely print everything out a few times to see what their creations looked like in physical form, often at the cost of $20 per sheet for photo-quality paper. The team quickly discovered that with Adobe Dimension and other Adobe Creative Cloud tools, they could easily do all of that from their laptops.

They turned to Adobe Stock to find everything from 3D models and materials, to images and templates for phones on platforms like Instagram. They retrieved those that can help, imported them into Dimension, resized them, and used materials and lighting tools to achieve their ultimate vision.

“On previous student projects, there were definitely mock-ups out there that I could use, but I would have to hunt for hours on the internet to find the right setup,” Olivia said. “Since using Adobe Dimension and Adobe Stock, which I might not have discovered if I hadn’t been studying from home, I was surprised to save so much time.”

Tara Ryan, another graphic and interactive design junior at Tyler, took advantage of Dimension to create a clever 3D invitation concept that could be used in digital or mobile environments for a different gathering, the now-postponed 2020 Met Gala fashion show in New York. This was part of a project given to her by Jenny Kowalski, an assistant professor of graphic and interactive design at Temple. She built both a digital box (or package) to send people as well as a cube-shaped “invitation” that “slips” inside of the box. After receiving the communication in email or via social media, users click on an outside layer — each with its own attractive picture or graphic image — to reach important event information at the center.

Under normal circumstances, Tara said, she might have worked with a physical rendering of the packaging and cube and would almost certainly have printed out versions of her work many times. But with Dimension, she was pleasantly surprised to learn she didn’t need to do any of that. Instead she kept it all digital, and she found the mental leap to visualizing objects that way wasn’t that difficult. In fact, it was seamless.

“It’s very user-friendly,” Tara said. “You can change the lighting and look at objects using the preview mode. Everything mirrors what you’d see in real life. Also, It’s great that you can bring in pictures you took or had on file and use the Match Image feature to instantly auto-match the lighting and perspective to the image you brought in.”

Synthetic photography in the house

Elizabeth “Liz” Paglia, also a graphic and interactive design junior and part of Jenny Kowalski’s class, put Dimension to work for a different project for which she had to choose a dollar store item selected by faculty and conceptualize new packaging. Using a marijuana drug test, Liz decided to make it more natural by adding in the concept that it can be a combination plant and testing kit, so it could be used for testing without wasting the packaging.

Her 3D digital creation, which easily resembles something produced by a Fortune 100 marketing firm, bears a striking resemblance to a professional snapshot of earth-toned boxes, bags, and a clay pot resting on a well-lit red tabletop. The synthetic photography looks genuine.

“I rebranded the drug test packaging to be a little more environmentally friendly, basically,” she said. “I started in Illustrator, imported those Ai files into Dimension, as well as some models and materials from Adobe Stock, and used Dimension to put everything together. The boxes in my project were just what came with the product. I didn’t have to download anything special. For the clay planter, I used a Styrofoam cup and replaced the texture with a digital cardboard material (available in Dimension’s Starter Assets). I just had to drag and drop the new material from Dimension’s Asset panel to make it look like a pot container. Then for the bags, I also applied a cardboard material to make them look more rough and earthy.”

The ability to start with a physical object, and easily apply a series of your own visuals over them, is what really won over the Temple design professors.

“The exciting thing about Dimension is the way in which you can bring in design aspects as separate pieces, separate graphics, and throw them right on the box to immediately see what the finished 3D product would look like,” Elizabeth said. “You’re no longer stuck to designing in a 2D frame. And that’s interesting for us as designers. We haven’t had the ability to do that so easily in the past.”

Abby noted something else her program and students had not fully recognized: how beneficial 3D rendering could be for the planet. Indeed, all three of her Generation Z students — part of an age group that cares very deeply about social causes — were equally passionate about this point.

“Our school has a huge initiative around reducing our carbon footprint, and we continuously talk about it in design,” said Tara. “Sustainability is always on the top of my mind. It’s probably one of my biggest complaints as a designer, in general. Sometimes it feels as though I’m making things just to be thrown away — constantly printing out version after version, wasting a lot of paper and ink in the process. Having the ability to put everything together in a program and visualize it there without having to physically create it is really nice.”

Olivia agreed. “Environmentally conscious design is a big thing right now,” she said. “For example, you have to do your best to avoid having excessive plastic packaging on products. Like, why is it that we open a candy bar and there are three wrappers in there before you get to the candy? Those are the types of things we’re starting to think about, and they are spurring new design trends that will be beneficial to our future.”

It’s not just about saving the planet, either, Olivia said. Sometimes thinking about the expense involved in wastefulness is equally important.

“Every time you throw something out, you are not just throwing out trees that were cut down and killed, but a lot of money as well,” she said. “I feel like, with the help of Adobe Dimension and having that access to Adobe Stock, we can all save so much money.”

Abby says her young students are thinking right when drawing connections between environmentally conscious and financially sound designs using 3D and stock as part of their professional futures.

“It’s going to be the great equalizer, giving every student the same opportunity to build something that is as incredible as they want to make it,” she said. “This has really opened up the doors for not just students who are conscious about sustainability, but those who will also have to be more mindful of finances. I feel like their exposure to Dimension and Stock has helped a lot in that regard.”

Looking ahead, Abby said she is optimistic life will return to normal. But she believes this experience of completing design project work remotely will have a long-lasting impact.

“This gave us an opportunity to try a different path and overcome some long-standing resistance to remote work,” she said. “Many designers have been holding on to the idea that it’s always important to physically have your hands on an object. While having physical objects still has its place in certain instances of design, being forced to do things this new way has really opened up their eyes.

Abby adds, “Having this experience and learning, along with our students, about how powerful Dimension and Stock can be, we have finally found a silver lining to moving our classes online this spring semester.”

To see more work using Adobe Stock and Dimension from the students at Tyler School of Art and Architecture at Temple University, check out their online exhibition.

As Senior Manager of Strategic Relations, Tim Bigelow is a self-proclaimed IP geek, passionate about helping content creators monetize their work. He works with his team to help global enterprises accelerate their creative workflows through the native integration of Adobe Creative Cloud.

Prioritizing Cyber Risk Management in a World of Uncertainty