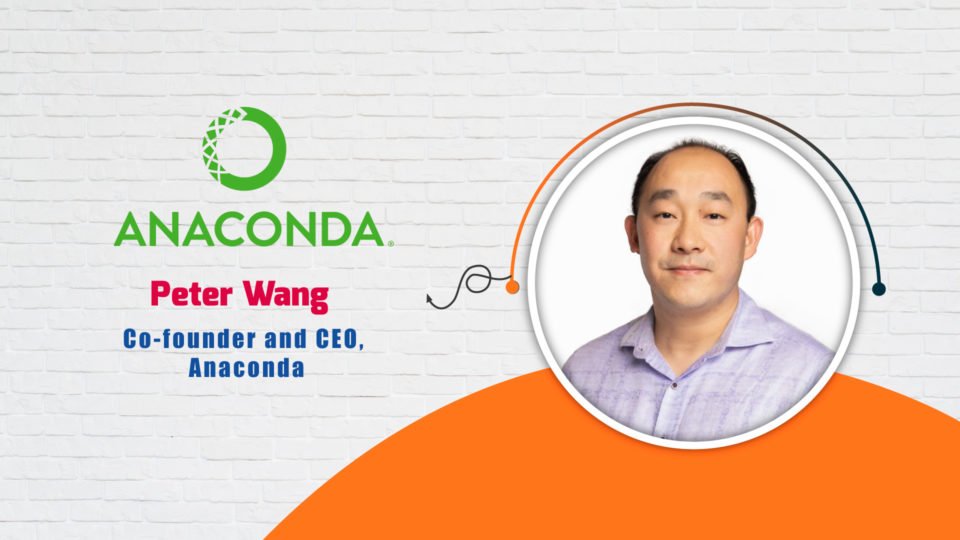 1. Tell us about your role at Anaconda?

I’m the co-founder and CEO of Anaconda. We started the company in 2012 at the peak of the big data movement, when my co-founders and I realized that Python was poised to become a foundational tool for data analysis. Since then, we’ve helped bring Python to the mainstream for data science, and worked to make open source easier and more secure for data scientists. I wear many hats as the CEO, but a particular passion of mine is being involved with the larger open source community and helping shepherd our work in it.

2. Can you tell us about how you came to be in data science?

I’ve been working with Python since 1999. At the time, it was primarily in the capacity of scientific computing. Toward the end of 2000, I was seeing more interest in Python from the business computing world, with more inquiries from hedge funds, investment banks, and other businesses. My co-founder and I sensed there was an interest in using Python for data analysis, and we wanted to help encourage and facilitate that movement. Fortunately, that’s also when the data science movement took off, and from there, we’ve been focused on bringing Python to the mainstream for data scientists.

3. How do you think modern machine learning is impacting the software development industry?

Its impact is just starting to be felt, and most veterans of the software industry will probably just see it as a new or different set of languages, frameworks, and the like. However, there will be a transformation in the long term that we are just at the beginning of. For the last 40 years, business software has treated itself as an area of activity that is somewhat distinct from hardware and data management. However, machine learning is an area where software is only one component of a holistic information system, and concepts such as hardware performance and data integrity are fundamental to the accuracy of the overall system. This holistic paradigm has been missing from the mainstream for decades now, relegated to areas such as “scientific computing”, and is making a comeback.

4. Why do you think developers should learn more about ML and data science instead of sticking only to the traditional functionalities used by practitioners?

Machine learning applications are the areas where businesses will be creating the largest amount of new, differentiated growth opportunities. There is an arms race here, and no business can afford not to compete.

5. How are open-source solutions playing a significant role in enhancing enterprise platforms?

Open source is about aligning users and innovators, so that they can do more together than a single entity could do alone. Mass adoption of open-source solutions gives us open standards that everyone can innovate over and above the proprietary ways as needed. It’s quite incredible what the community has been able to achieve thus far by coming together. As a result, open-source software forms the backbone of many key enterprise platforms today. In fact, many leading technology companies wouldn’t exist as we know them without the open-source foundations they’re built on! At Anaconda, we want to continue supporting the use of open source in enterprise environments by building managed repositories that combine the best of safety and innovation.

6. We recently read about IBM integrating the Team Edition repository of Anaconda with Watson Studio. Can you tell us more about that?

We’ve worked with IBM in the past, but what makes me really excited about this particular strategic partnership – integrating Anaconda Team Edition with IBM Watson Studio on IBM Cloud Pak for Data – is what it means for customers. A persistent pain point for organizations looking to benefit from open source has been managing these open tools in a secure, governed way within enterprise environments. Oftentimes, data scientists have had to rely on shadow IT or shadow data management to get their jobs done. With this integrated offering, we’re shouldering that burden, so that customers no longer have to choose between the speed of innovation or good governance when it comes to open source.

7. Can you tell us about the impact of this collaboration with IBM on innovation in machine learning solutions?

This partnership will help further establish the value of open-source data science for business analytics. As we make open source more enterprise-friendly, we’re going to see increased innovation as companies are able to build on the latest open-source technologies, and by contributing some of their work back to the open-source community, a virtuous cycle of improved technologies can develop.

8. What digital innovation in the tech space do you think will make its mark in 2020?

There are a lot of wonderful and inventive things happening across the board, but I also think that 2020 has (hopefully) gotten everyone thinking pretty hard about the essentials of what we need, versus merely what new shiny objects we might be pursuing. So, I’m hoping that the big innovation in 2020 is that, given how much people are suffering from “screen fatigue” with work-from-home and online schooling, people become more intentional about how much they use their devices and technology.

9. How do you personally keep up with the rapidly changing tech world?

A combination of the usual suspects in social media (Hacker News, Reddit, curated Twitter lists, and also some long-form sites. I’ve been enjoying more podcasts recently and see some surprisingly good stuff from various people on personal blogposts. I used to be more neurotic about it, but now I’m realizing that the really big stuff happens rarely, and most of the day-to-day stuff is very noisy. So, I try to manage my time allocations every week. If I miss something breaking by a few days, it’s almost never a big deal.

10. What open-source solutions outside of the Anaconda ecosystem are you most excited about right now?

I’m excited about some recent developments in peer-to-peer web technology, such as Beaker Browser and its Hyper protocol, or the Memex project. These have the potential to reshape how people think about the internet. As more people start using them, they’ll realize how much ground we’ve lost in allowing a global information system to get into an infotainment broadcast platform.

11. What movie inspires you the most?

That’s a tough one. I don’t know if it counts as inspiration, but a movie which I keep coming back to is ‘Cinema Paradiso’. It wonderfully, sweetly captures these universal human themes of wonder, love, loss, and redemption.

Peter Wang, co-founder and CEO at Anaconda, takes it as his mission to create open-source foundational tools for the future of data analytics, and visualization. He has over 15 years’ experience in software design and development across a broad range of areas, including 3D graphics, geophysics, large data simulation and visualization, financial risk modeling, and medical imaging.

Darktrace and HackerOne Partner to Add AI to...