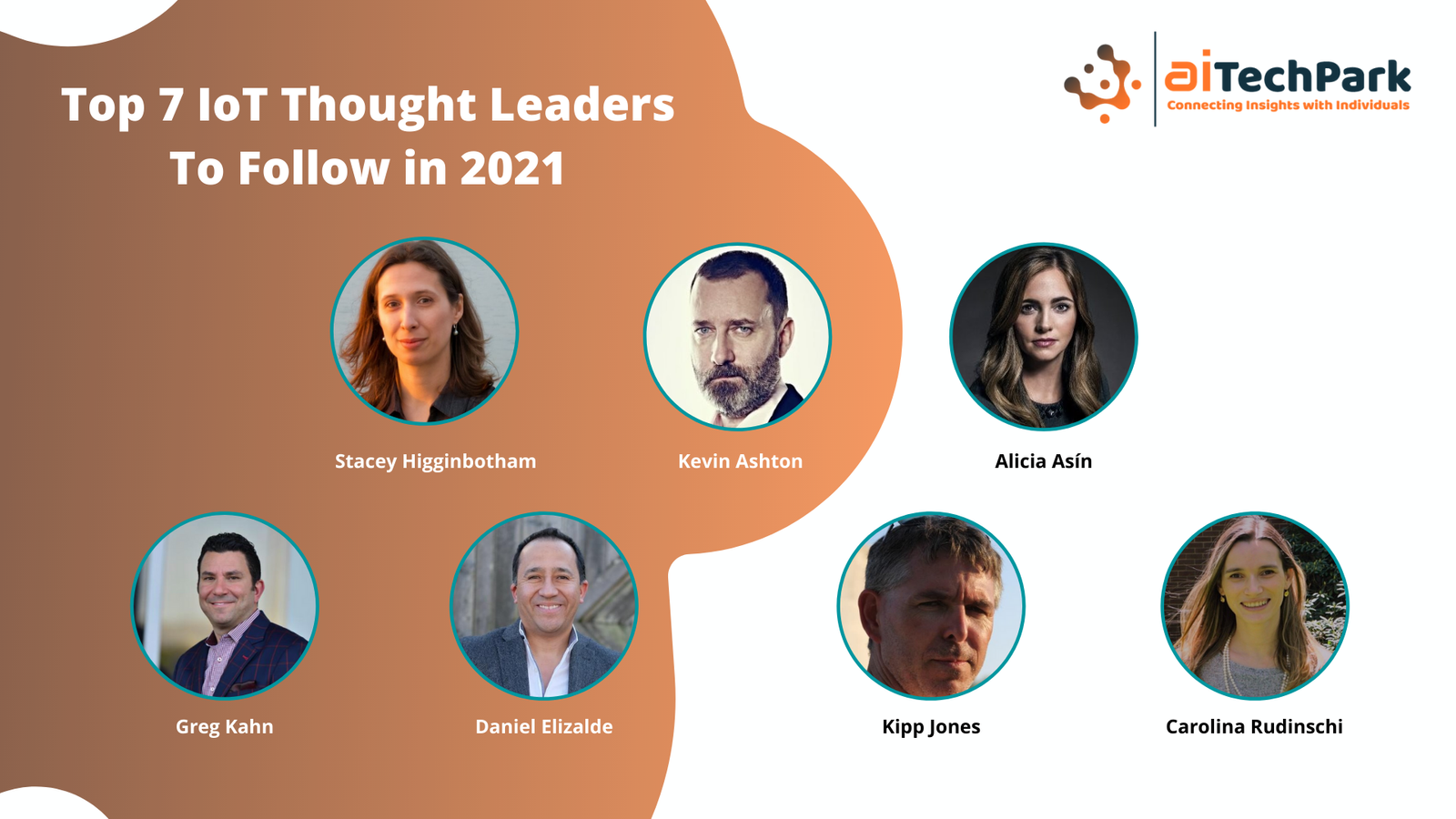 IoT is growing at an exponential rate. Enlisted below are our picks for the the top 7 IoT leaders/influencers to keep abreast the newer updates and developments in IoT space.

According to Statista, global spending on IoT is forecast to reach 1.1. Trillion U.S. dollars in 2022.

As we all know, IoT is growing at an exponential rate. From connected vehicles to wearables and devices, from RFID sensors in goods, warehouses and manufacturing plants to smart devices for both home and office. We are approaching this new world where everything and everyone is constantly connected. It is opening up the whole swaddle of new opportunities for creating new products and services. The IoT is creating an explosion of data and companies can now collect and exchange that data and integrate new insights and make better business decisions.

IoT is becoming an incredibly powerful and transformative force for businesses. It is suggestible that business leaders stay up-to-date about the latest IoT trends and insights, and they join the right conversations to learn more about how they can successfully implement IoT at their company.

Let us introduce you to seven top IoT Leaders – who are making an impact in the IoT world. From journalists and writers to product innovators and CTOs, add these leaders and influencers to your follower list for 2021 and stay current while you carve out your own Internet of Things journey.

A technology pioneer who is known for coining the term “the Internet of Things” and co-founded the Auto-ID Centre at MIT, which created a global standard system for RFID and other sensors. He is a visionary technologist. He led three successful tech start-ups – Zensi, ThingMagic and EnerNOC.

Kevin is the author of a book “How to Fly a Horse – the Secret History of Creation, Innovation and Discovery,” – it was named under 2015’s Porchlight Business Book of the Year. His writing about innovation and technology has also appeared in the New York Times, The Atlantic, Politico and Quarts. He gives talks about the Internet of Things, digital transformation, the future and innovation all over the world.

Alicia is the CEO of Libelium – an IoT-centred company with really neat hardware creation. It designs and manufactures wireless sensor network devices. Alicia co-founded the company in 2006 and continues to speak at international conferences. Alicia believes IoT is the next technological revolution and that it all begins with the smart cities. Alicia has her Master’s in computing engineer from the University of Zaragoza and plenty of years of experience working in the Internet of Things industry. She is an engineer fascinated with the next technological revolution: IoT.

Daniel is a seasoned product executive with over 20 years of experience working with complex B2B technology, enterprise and industrial products leveraging emerging technologies such as Iot, 5G, AI, Cloud and Edge Computing. He is currently the Vice President of IoT at Ericsson and is an IoT instructor at Stanford University.

He comes with an experience of managing enterprise product portfolios and the complete lifecycle of end-to-end SaaS and IoT solutions – that includes hardware, embedded software, cloud platforms, and user applications. A keynote speaker at conferences, got featured in some of the top outlets for IoT and Product Management. He the author of the #1 blog on IoT Product Management, and the host of “The Enterprise Product Leadership” podcast.

An expert in IoT and technology in general, she has been covering technology for major publications for 18 years. Her work has appeared in Fortune, PCMag, MIT Technology Review, Gigaom and Worth magazine. She writes about the IIoT – Industrial Internet of Things, how businesses are transforming their operations with data, and spend hours testing out smart home gadgets. She combines tech with business realities so entrepreneurs, investors and business leaders can understand what’s going on and how to profit from it.

Kipp Jones has been creating IoT related technology and strategies for more than 20 years. He is a technology fanatic who loves to make new things. Business, product, research and development in many successful strat-up tech companies. Advanced technical degrees in technology industry and academic immersion.

Kipp had worked at Skyhook for over 15 years. He is currently the Chief Technology Evangelist. Kipp was the brains behind 19 of Skyhook’s patents, he has also contributed to blogs like IoT Agenda.

Greg Kahn is with 25+ years of experience – launching new ventures and implementing growth strategies for global media, technology and advertising companies. He knows how to develop and maintain long-term relationships with key industry leaders – from Silicon Valley to Main Street to Hollywood to Madison Avenue. He is an advisor and mentor to media/technology entrepreneurs.

Greg is a keynote speaker at global and national events. He was awarded as the Business Role Model of the Year in 2020by CEO World. He was named under one of the Top IoT influencers by Huffington Post, Inc. Magazine, Hewlett Packard Enterprise and the Internet of Business. He was also awarded as Media All-Star and Media Maven Honors by Adweek and Advertising Age, respectively.

Carolina is the co-founder of IIoT World, the first global digital publication which is 100% focused on IoT. Her interest is sustainability, smart cities and digital transformation to connect Industry, IIoT, and Industry 4.0. She managed to get IIoT World on the radar of IIoT Influencers and enthusiasts, now being the number 1 influencer on six topics according to one of the ranking websites in the industry.

Carolina is the author of a Digital Media Book – she brings a wealth of experience in Research, Journalism and SMM. She has a Ph. D. in Digital Journalism and is experiences in running campaigns on Google AdWords, Facebook, and Twitter & LinkedIn.

Interview with Jean-Simon Venne, Co-founder and CTO at BrainBox AI

The Impact of AI on Presidential Elections 2020

What is Cognitive RPA? Why is it on a Surge?